How Investors Can Navigate Growing Concerns in Q4 2021

As we begin the final quarter of 2021, the economy is shifting from a recovery phase to a sustained expansion. Investor sentiment has shifted alongside this, swinging from bullishness to bearishness. This is understandable because, while the underlying trends are positive, it’s no longer the case that the economy and markets have nowhere to go but up. Challenges such as the pace of growth, fears of stagflation, debt problems in China, Fed policy, the government debt ceiling and more are weighing on investors' minds. How can investors balance risk and reward with a long-term perspective during the final months of the year?

It’s important to emphasize that this is all occurring against a backdrop of a strong economy and robust corporate profits - factors that do not depend on how investors feel. Ultimately, long-term investors ought to position themselves for years and decades, not days, weeks or months. By most measures, we are still early in the business cycle despite the shared feeling that the pandemic has lasted a lifetime already. Achieving financial goals requires true dedication and discipline, regardless of what markets are concerned about in the short run. 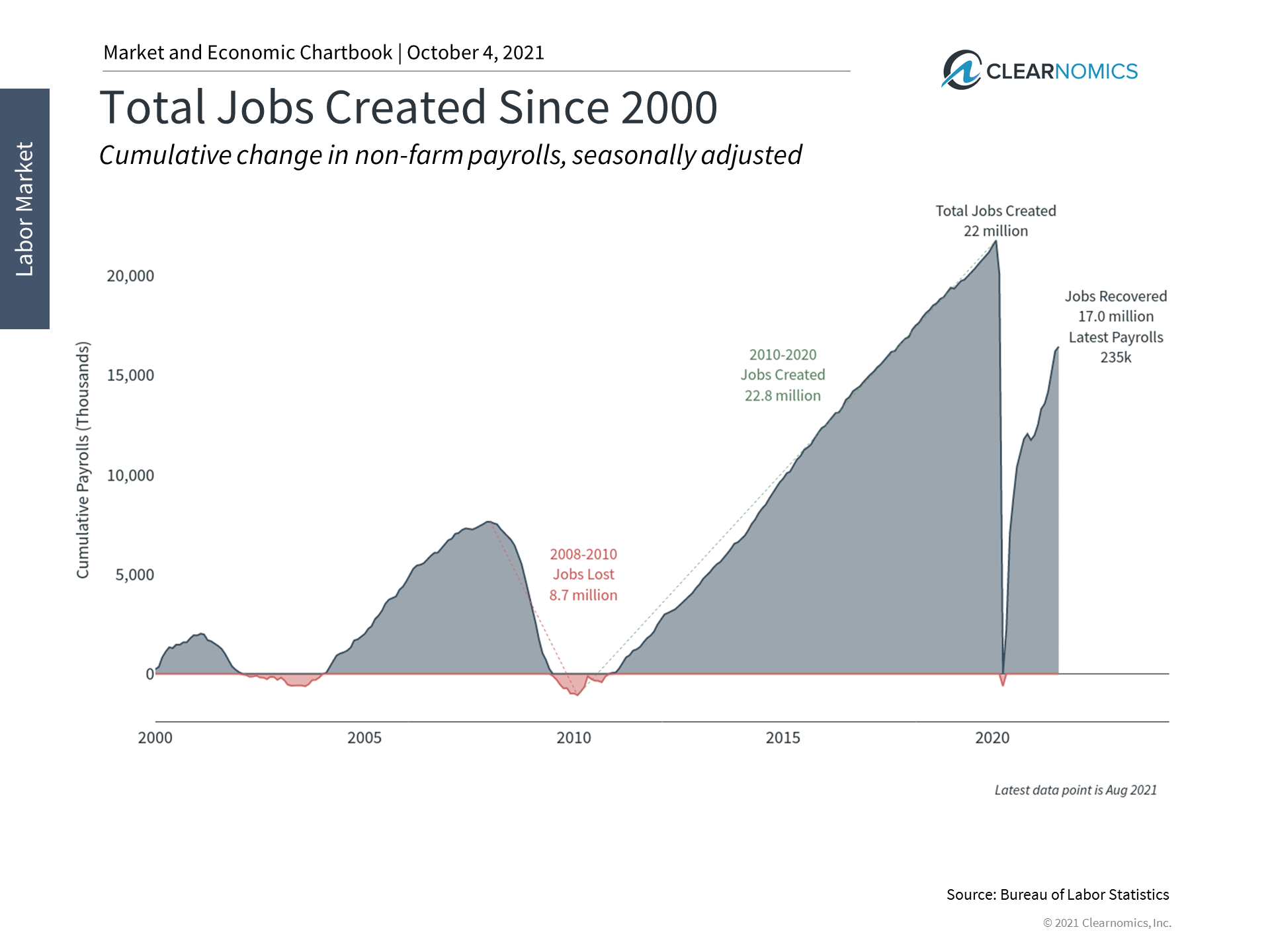 The economic expansion is still strong

The economy is still growing rapidly 18 months after the unemployment rate peaked at 14.8%. U.S. GDP has surpassed pre-pandemic levels, as have corporate profits, and many measures of activity are at multi-decade highs. Despite investor fears, the underlying growth trends are still positive.

For many, jobs are the key metric since the pandemic directly impacted individuals' ability to work and earn a living. Over 75% of the jobs lost during the pandemic have been regained and the unemployment rate has fallen to only 5.2%. While some sectors are still struggling to recover, others are struggling to hire workers fast enough. There are officially more job openings than unemployed individuals - an imbalance that is positive but that speaks to the changing nature of worker skills, job locations and more. 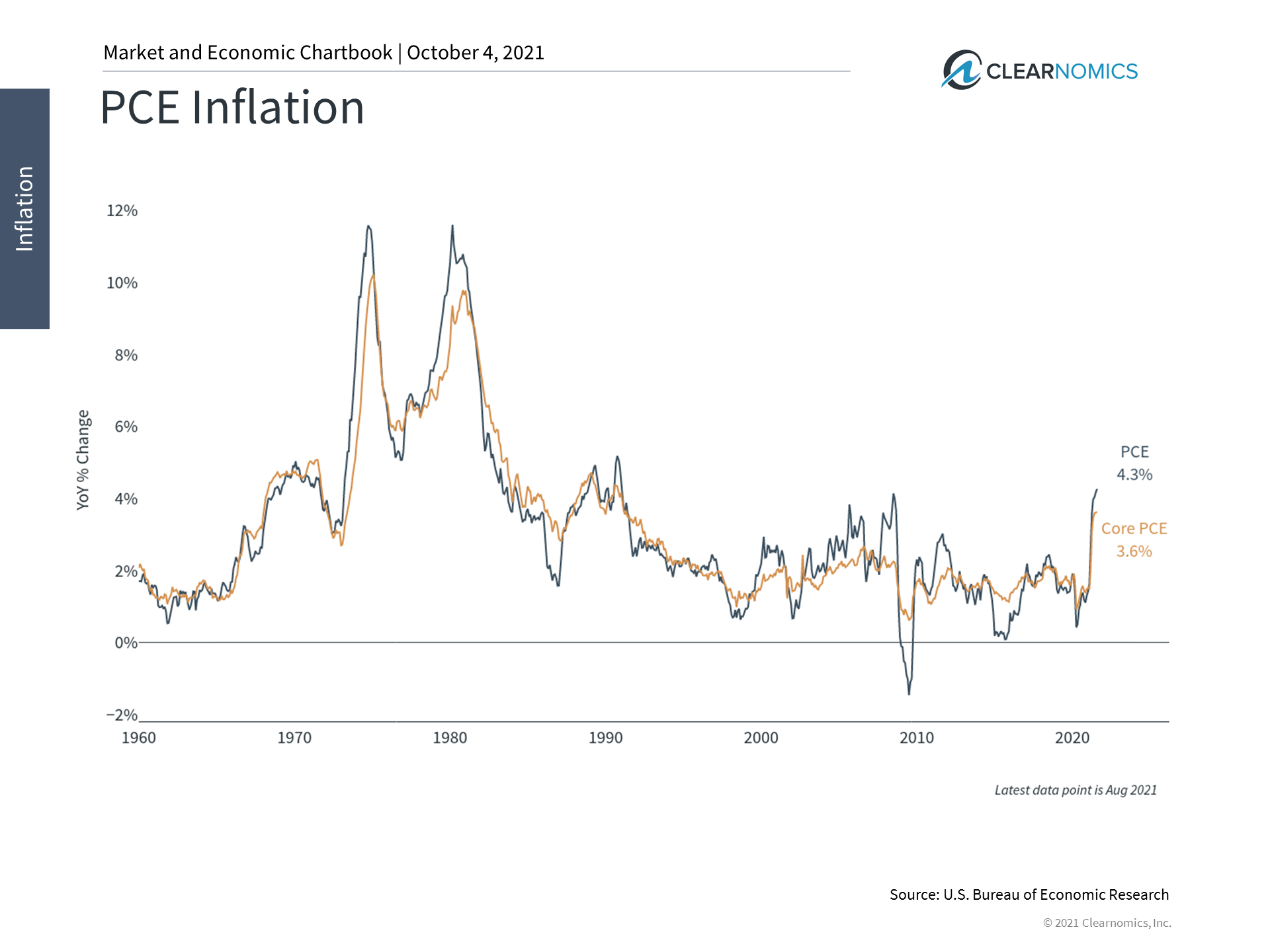 Inflation remains high and will depend on supply constraints

Inflation remains elevated across a number of traditional measures. The PCE inflation rate favored by the Fed, for instance, is at its highest levels since the early 1990s. The Fed itself has made it clear that their inflation targets have been reached, setting the stage for a reduction in asset purchases.

Many different factors are often referred to under the term “inflation.” Traditionally, inflation is seen as a monetary phenomenon. This made the 2010’s perplexing to many investors since vast amounts of monetary stimulus failed to materialize in the form of pricing pressures. Today, the biggest inflationary factors are the swift economic rebound and the on-going supply chain disruptions. While impossible to predict accurately, these effects will likely improve over time. 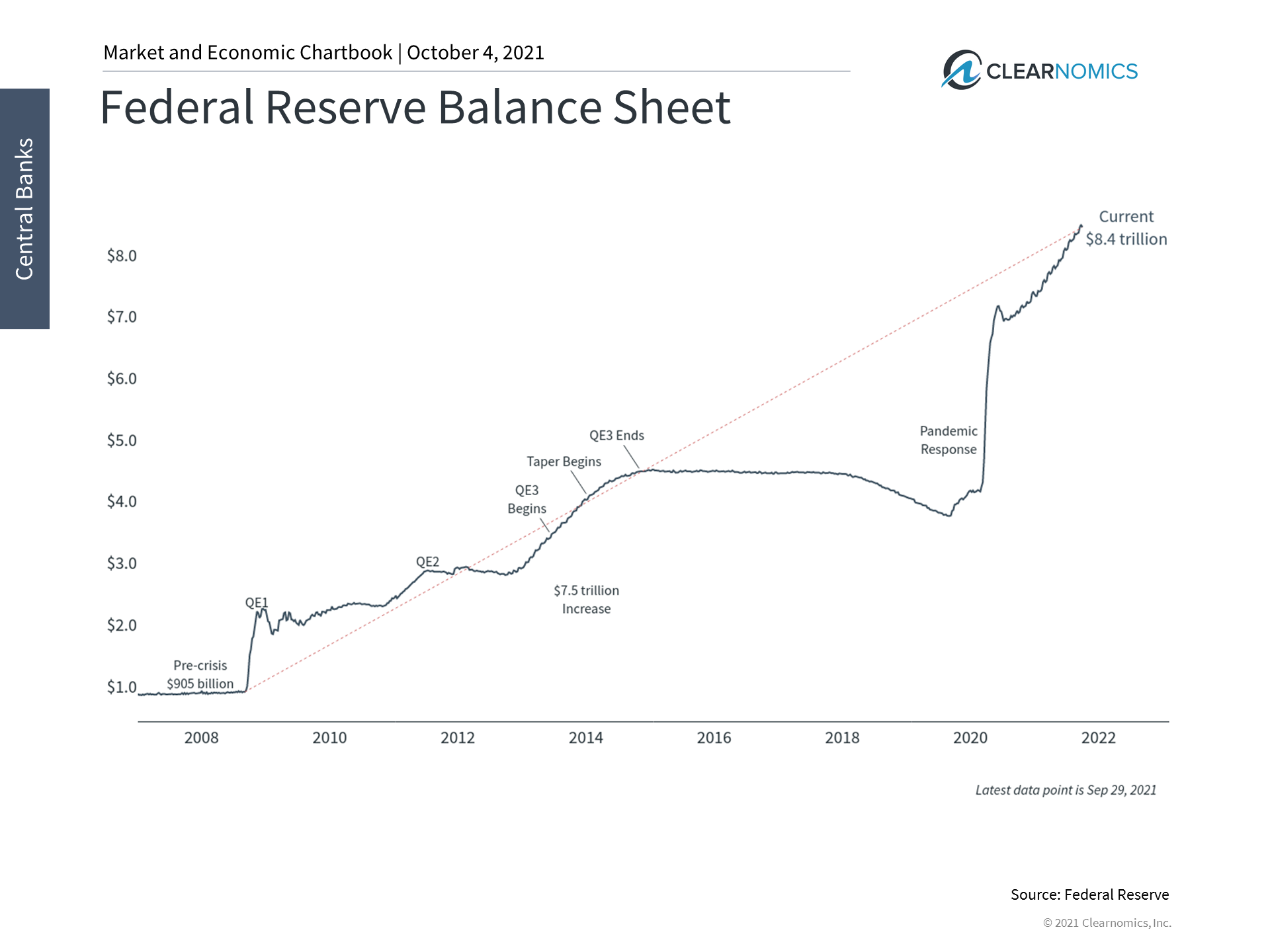 The Fed will likely begin tapering its asset purchases in the fourth quarter. The central bank has been broadcasting this possibility for much of the year and has made it clear that tapering will be a gradual process that will last well into 2022. They have also communicated that rate hikes will require a different, more stringent set of criteria and will likely not begin until after their asset purchases end.

For investors, this means that there will likely be upward pressure on interest rates over a long period of time. Still, investors should not overreact to these gradual rate rises, especially given the extraordinarily low level of rates today.

Government spending and the debt ceiling are front and center

Partisanship in Washington is on full display as a number of issues are being discussed. In the short run, the debt ceiling is the most pressing concern for financial markets which fear a repeat of 2011’s fiscal cliff scenario. In the long run, new spending proposals will have an important impact on infrastructure, taxes and more.

While these developments are important to watch, investors ought to maintain a long-term perspective on the impact of Washington policy on markets. Financial markets and portfolios have performed well across a variety of party leadership and tax regimes. Regardless of how one personally feels about new bills and proposals, it’s important to focus more on staying invested. 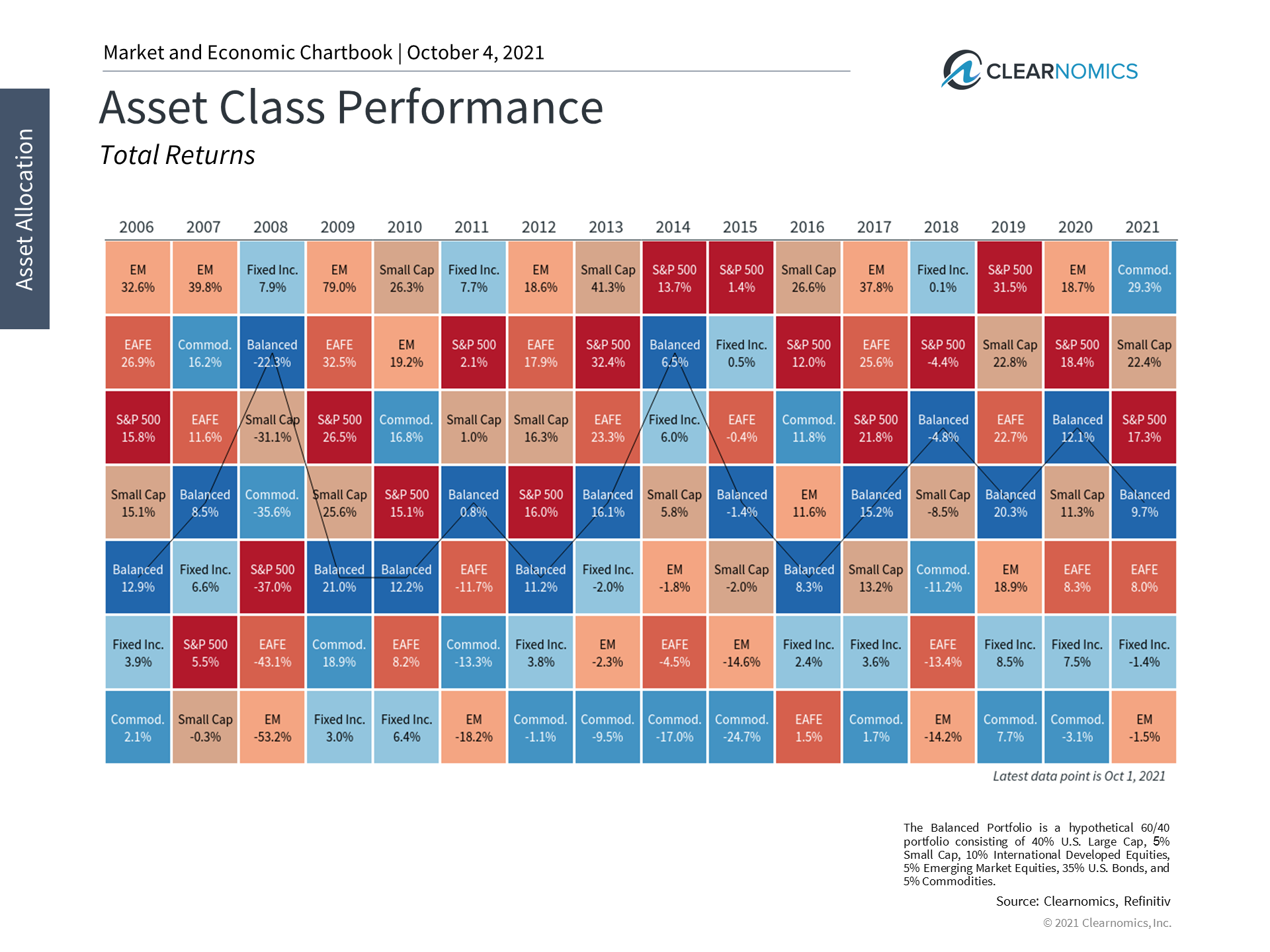 Although emerging markets have stumbled this year due to the delta variant and challenges in China, staying internationally diversified is still important. Many of the challenges around debt, shadow banking and regulation in China have been in focus for over a decade. And while these issues are coming to a head, the Chinese government is likely to be in a position to cushion any major fallout.

The bottom line? Investors must always balance risk with reward. Despite shifts in sentiment, staying invested and diversified are still the keys to achieving financial goals in Q4 and beyond.

Ready to get started?

Proactive communication on tough market topics is critical to building trust and confidence. Our always up-to-date charts and insights equip you to address challenging client questions.

Stand out from the crowd. Our flexible suite of tools, including talking points and regular market updates, enable you to create compelling and concise newsletters that clients will look forward to reading.

Let your brand and message shine

You’ve put in the work to create a brand and narrative that sets you apart. With Clearnomics, you can craft personalized insights that are fully branded with your firm’s logo.

Request Our Getting Started Guide
Fill out my online form.